This year’s Artist Book Mentorship & Creation Program is underway with a great new group of mentors and mentees. Participants will work together over the period of a year to explore their practice through the artist book genre and create a new work.

Hassaan Ashraf will be mentored by Ashok Mathur: 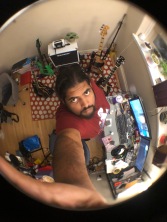 Hassaan Ashraf is a multi-disciplinary artist who moved to Winnipeg in 2012 to pursue a Master’s degree in Fine Arts. His work reflects on his journey as a displaced artist, dealing with themes of cross-cultural experience, diaspora, homesickness, culture shock, global culture, post-colonialism, politics and the west’s discomfort with alien cultures. To express these ideas, Ashraf draws on his own experience as a Lahori who had never been a part of a diaspora, had never lived as a minority, and had never even been to a foreign country before coming to Winnipeg, Canada. His work reexamines everyday experiences he had during his life in Lahore, including customary modes of transportation, pastimes like kite flying, the Urdu language, and everyday life with the convenience of live-in servants. These practices, which were a part of a daily routine, ended when he came to Manitoba.

Ashok Mathur is a writer, artist, and cultural organizer, currently Dean of Graduate Studies at OCAD University in Toronto. He has published numerous books of creative fiction and has also published/produced various book-works in multiple forms.

Mariana Muñoz Gomez will be mentored by Patrick Cruz:

Mariana Muñoz Gomez is an emerging artist and writer based in Winnipeg, MB/Treaty 1 Territory. She is a co-founder of zine and curatorial collectives Sappho Zine Collective, Carnation, and Calling Card, and is part of the Mujer Artista Collective. Mariana‘s visual practice is situated at the intersection of identity, place, representation, and language. These topics are negotiated through manipulating familiar forms and employing strategies of interference within a variety of media including text works, screenprints, photography and video. Her work is informed by intersectional feminism and topics of diaspora and displacement.

melannie monoceros will be mentored by Erika DeFreitas:

melannie (mg) monoceros is a poet and artist exploring polysensory production through text/ile, performance, and installation. They live and work on the traditional land of the  Anishinaabe, Métis, Cree, Dakota and Oji-Cree Nations, otherwise known as Treaty One territories/Winnipeg, MB. They have presented work at the Mayworks Festival Toronto, ON (2015), Buddies in Bad Times Theatre Toronto, ON (2016), the National Arts Centre Ottawa, ON (2017), and the Dawson City International Short Film Festival (2018). monoceros was honored with the Sharon Wolfe Artist in Residence at Tangled Art + Disability (2014) and was a VONA fellow with mentor Staceyann Chin (2014). They have since been awarded grants from the Canada, Ontario, and Toronto Arts Councils in 2016, 2017, and 2018. melannie has enjoyed being a guest lecturer at the Yukon School of Visual Arts, Concordia University, Ontario College of Art and Design, and Ryerson University. melannie’s writing has appeared in The Peak, Make/Shift Magazine, and When Language Runs Dry. Currently melannie is at work on a project titled “a n c e s t o r a d i o”. Tuning the Ocean, the first of the series, exhibited as part of TSG: Uprising at the Gladstone Hotel Gallery in 2017. During the winter of 2018, melannie was on residency on the Tr’ondek Hwech’in First Nation/Dawson City, Yukon as part of The Weight of Mountains filmmaking residency. melannie is gracious to have been awarded the Canada Council for the Arts Composite Grant to continue and complete their film and literary projects. They also look forward to participating in the Foundation Mentorship Program at MAWA (Mentoring Artists for Women’s Art) beginnning Fall 2018.

Erika DeFreitas is a Scarborough-based artist whose practice includes the use of performance, photography, video, installation, textiles, works on paper, and writing. Placing an emphasis on process, gesture, the body, documentation, and paranormal phenomena, she works through attempts to understand concepts of loss, post-memory, inheritance, and objecthood.

DeFreitas’ work has been exhibited nationally and internationally including at Project Row Houses and the Museum of African American Culture, Houston; Fort Worth Contemporary Arts; Ulrich Museum of Art, Wichita; Kitchener-Waterloo Art Gallery; Platform Centre for Photographic and Digital Arts, Winnipeg; and Gallery 44, Toronto. A recipient of the Toronto Friends of Visual Artist’ 2016 Finalist Artist Prize, the 2016 John Hartman Award, and longlisted for the 2017 Sobey Art Award, she has also been awarded several grants from the Canada Arts Council, Ontario Arts Council, and the Toronto Arts Council. DeFreitas holds a Master of Visual Studies from the University of Toronto.

Workshop: Introduction to Typography for Artists by Ray Fenwick

When asked to define typography, a common answer is that it is the selection, arrangement and spacing of letters and words. This is all technically true, but typography is so much more than just technical. Typography is language made visible. It is a way of speaking, and of listening. It is our voice in the world and a voice itself, speaking to us constantly, saturating our environments. Typography mediates much of our knowledge and yet, through some form of dark magic, somehow manages to remain hidden to most of us.

The purpose of this multi-part workshop, led by Winnipeg artist/typographer Ray Fenwick, is to drag typography into the light, exploring its history, its form, and its potential for artists. Participants will receive an intensive introduction to the broad world of typography, increasing their sensitivity and understanding while nurturing excitement for both its formal and conceptual gifts. As both an artist and typographer, Fenwick will pull from typographic and design history, but will lean heavily on the work of artists whose use of type is a crucial feature. This will include artists such as Tauba Auerbach, Ed Fella, Dada/Fluxus Artists, Jenny Holzer, Barbara Kruger, Glenn Ligon, Bruce Nauman, Yoko Ono, Adrian Piper, Kay Rosen, Ed Ruscha, Lawrence Weiner and many more. In all of these cases, typographic acuity has played a pivotal role in creating powerful works of art.

The workshop will be offered as four separate two-hour classes and will consist of short lectures, hands-on individual and group activities, and reading discussions. Also included as part of the workshop will be an extensive package of texts to provide both elaboration on what is discussed and further reading.

It is important to note that this workshop is not meant as an introduction to computer typesetting. There will be no software instruction, nor any use of computers. Those interested in learning these skills after the workshop will be provided with next steps and options for tutorials.

To apply, please send an application including the following materials:

-a paragraph describing your pratice

-a paragraph describing why you want to participate in this program

-3 samples of your work

This workshop is made possible through the generous support of the Manitoba Arts Council.

Ray Fenwick is an interdisciplinary artist working with performance, video, sound and typography. His work is an often playful attempt to explore unusual relationships with language, voice, and communication. In addition to being an actively practicing artist, Ray Fenwick has over 20 years experience in typography, design and illustration. He has worked on type, lettering and design for clients like the New York Times, Penguin Books, Nike, Oprah Magazine, Random House, Virgin, Drawn and Quarterly and more. He has reviewed books on typography, judged a national Typography competition, and taught introductory Typography at NSCAD in Halifax, NS. As an author he created perhaps the first “typographic comic”, Hall of Best Knowledge. The book, published by Fantagraphics, made several “Best Graphic Novel” lists and earned a nomination for “Best Avant-Garde Graphic Novel” from The Canadian Cartooning Awards. His most recent book, Mascots, was published January 2011, also published by Fantagraphics. 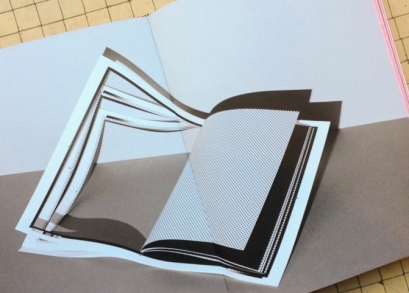 Also As Well Too invites applications to the Artist Book Mentorship & Creation Program. This program was created to spur artist book creation by artists who have never explored bookworks in their practice.

Three artists will be selected for this year-long program. Selected artists will be connected with an artist book mentor whose knowledge and experience with bookworks will help expand understanding of the possibilities for creation in the wide genre of artist books and multiples. The artists will meet with their mentor throughout the year. The group will also meet periodically to talk about their progress and gain insight from each other’s process. Discussion surrounds concept, format, material, and metaphor specific to the idea the artist has proposed for the project. Mentors introduce the artists to compelling and creative examples of artist books, from codex to sculptural to digital. Through these discussions and their process, artists develop a unique final artwork in the genre of the artist book that will be launched through Also As Well Too Press and exist in the Also As Well Too artist book library.

Selected artists will receive an $800 fee for their participation and an additional $800 towards production of their bookwork.

Winnipeg-based artists at any stage in their career are welcome to apply but should not have previously explored bookworks in their practice. We welcome applicants who have exhibited their artwork locally and beyond and who have developed strong bodies of work that resonate a variety of approaches and concerns. This program is not currently open to students.

The Artist Book Mentorship & Creation Program is made possible by the generous support of the Manitoba Arts Council.

Please send the following in an application package to also.aswell.too@gmail.com by 11:59pm Sunday, October 14: